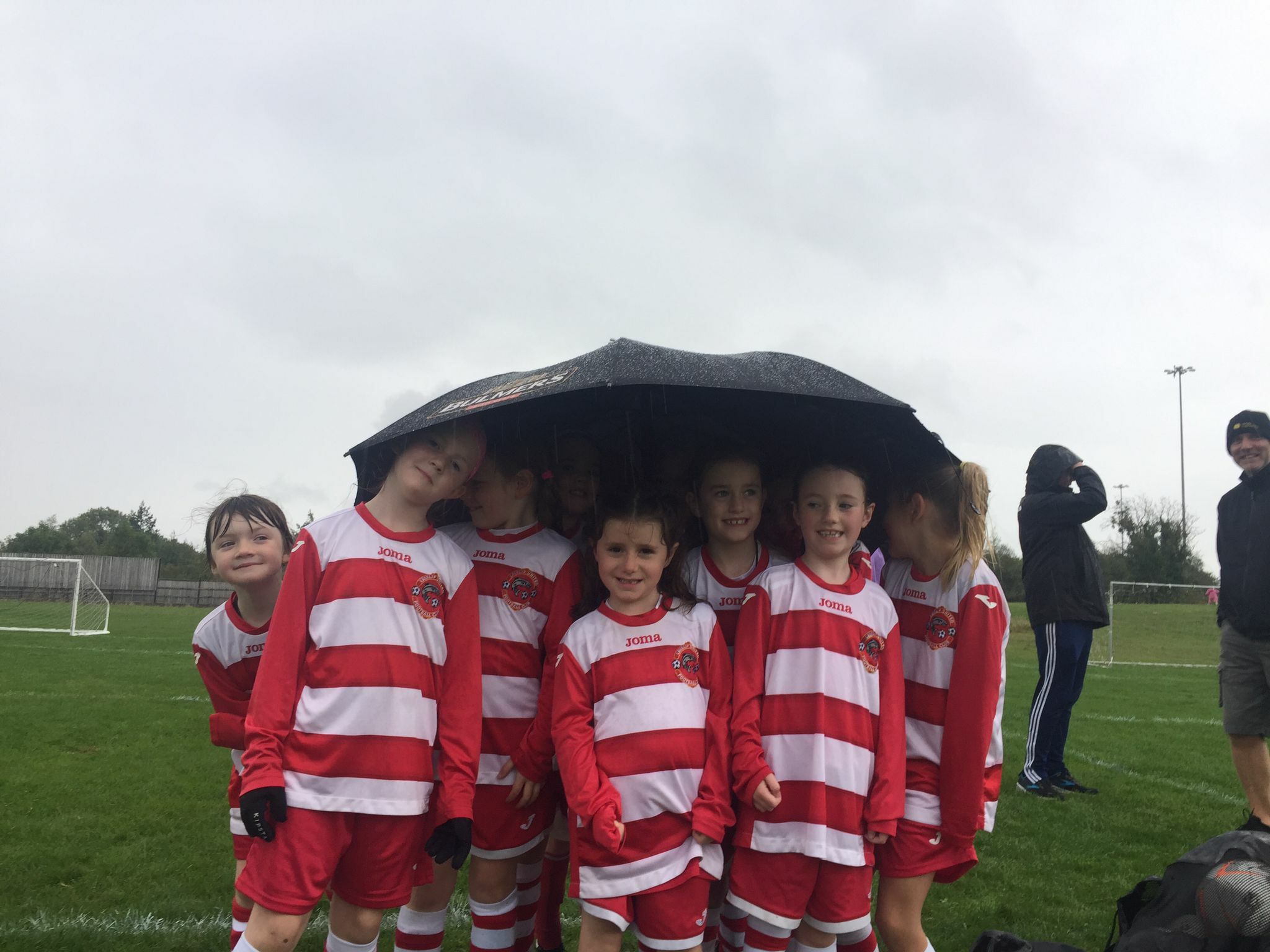 U8 Girls Leixlip V Knocklyon
The U8s girls played their first game of the season against Knocklyon. Girls did great despite the weather (Photo Attached).

U17B
Park Celtic 3-3 Leixlip
Not a great day for football, strange game as well, a game we should have won but could easily have lost. We dominated the 1st half and took a deserved 2-0  lead with Goals from Adam Dagg and Taidgh Flanagan, however we conceded a soft 1 at the back post just on the stroke of halftime which was against the run of play. The second half was a fairly scrappy affair and we conceded the equaliser from a bizarre penalty decision against us. We went 3-2 up within 5 minutes with a finish from Owen Kelly, but we couldn't see out the game and conceded a sloppy equaliser from a half-cleared corner.

U14 Sun vs Belmont
Leixlip 2 - 1
Great battling to secure our first win of the season. All the lads played great and fought hard for one another. We took an early lead and held on as Belmont pressed hard in the first half. The equaliser came midway through the second half. The lads responded really well and got a deserved winner with 10 minutes to go. Delighted for the lads - a well deserved win.

U15 Sun 2. Leixlip 4-1 Belmont FC
Great performance by the lads against a big physical side. Leixlip went 1 nil up midway through the first half after a good goal from James Gaynor. Gaynor put Leixlip 2 nil up early in the second half after lobbing the keeper from outside the box. Belmont got one back midway through the half to make it 2-1. Great battling from Fionn Cronin resulted in Leixlip's third goal, while Harry Dunne finished the scoring with a stooping header close to the final whistle.

O35’s Masters Shield Semi Final
Leixlip v Rathangan 8-7 on penalties
Leixlip started very well and were up 1-0 within 5 minutes when Niall Gouldsbury was played in behind the defence by Glenn McCabe playing on the right of midfield. Rathangan pushed on and got an equaliser after some poor defending on the left hand side. We changed our midfield and got more of the ball but couldn’t score with all the chances we had including an overhead kick that hit the post from center forward Robbie Martin. Vinnie Dalton made the keeper parry a rasping free kick for a corner which resulted in a poor set piece.
Second half started and we attacked again but to no avail. The second goal came from a good run from Niall Gouldsbury down the right and he was fouled by the Rathangan defender. From the resulting free kick Tom St Ledger curled the free kick into the top left hand corner of the net. 2-1 up and playing well but we lost the ball on the left and Rathangan attacked and a ball across the middle was slotted home by the attacker. We pressed again and wasted a few corners until one dropped to Robbie Martin and he set up Glen McCabe who curled the ball from the top of the box past the goal keeper. 3-2 up with 15 minutes to go. Some poor refereeing decisions allowed Rathangan to score their third. We pressed again down the left and a nice one-two between Ian Tighe and Robbie Martin allowed Robbie to superbly shoot into the right corner past the goal keeper's hands. 5 mins to go and we were on top. Rathangan's last attack was straight down the middle and a poor defence decision allowed the ball to go to one of their players 30 yards out, the ball bobbled and he shot the ball in the air and our goal keeper couldn’t keep it out. 4-4 it’s going to penalties. No extra time. 3 well taken penalties from either side. The 4th penalty by Rathangan was low to the left side of our goal keeper Terry Cassidys goal and he went down to save it. Last penalty for Leixlip by Glen McCabe for us to make the Final against Monasterevin later in the month.


U15B girls: Leixlip 1 Dunboyne 3
Disappointing loss. Conceded on the break after about 15 minutes of great pressure. We levelled when Lucy Morris rounded their keeper. In the second half the 2 goals we conceded were pretty soft.

U14B Leixlip 6-1 Greystones.
5-0 at half time allowed us to try a few things differently in the second half. Overall we were very impressed with the performance and had a good crowd watching.
The weather was much kinder this weekend. Greystones allowed us to play football how we wanted for the first half. With only 2 minutes on the clock, Eoghan Lyons hit the ball hard from the penalty spot to put an early goal on the score sheet. After that, there was very little resistance for us in the first half. In the second half, Greystones upped their game, as we settled in for the win, and took an unstoppable free kick from just outside the box placed into the top left corner.  The game ended 6-1 with a hat-trick from Adam Abidoye, and goals from Eoghan Lyons, Ryan Good and Paddy Corrigan.

U13D
Leixlip 1 Ballyowen Celtic 2
First game for the lads at 11 aside and on the senior pitch.
They went ahead and we equalised with a penalty from Jake McCormack.
Plenty of chances for both teams to get the winner.
Ballyowen scored with about 10 minutes to go but great battling from the lads

U11 Sat B
Collinstown 3-4 Leixlip
We were well on top for the first 10 minutes and then got caught with 2 long balls and a good finish to find ourselves 3 nil down. Alan Maly got us back in the game just before half time when he picked up the ball in midfield and finished well into the bottom corner. We got a penalty early in the second half and Alan again made no mistake. Eoghan Fahy poked home the equaliser after a scramble in the box and he then scored a free kick to make it 4-3 with a few minutes to go. Collinstown hit the crossbar right at the death but we held on for a well deserved win.

U13 B1 Boys: Belvedere 0 - Leixlip 2
First league match at 11 aside & the lads started on the front foot. Ben Kineavy scored a fine volley from a flowing move. Soon followed by Rian Fahy scoring a break away goal.
Belvedere woke up and both sides went close a number of times. The boys worked hard for a satisfying win and Conor Horan made a couple of fine saves to ensure a clean sheet.

U15 Sat B
Kilnamanagh 3-1 Leixlip
10am kickoffs not my favourite and apparently same for the boys as we only really got going second half. We were second best first half and struggled to get our game going and we came in 2-0 down with no real complaints, after some inspirational words at halftime the boys really started playing and we looked a different team, a lovely goal from Elliot Bannon got us back into it and we had 2 or 3 good chances but couldn't force it in, they sealed the points with a couple of minutes to go with a sucker punch as we pressed for the equaliser.

MGL u17A Leixlip 0 Lucan 1
Very  unfortunate defeat for the girls there, conceding the winner in the 86th minute. We played well especially in the second half but Lucan keeper was very solid. We didn't get a lucky break in front of goals that our play deserved, we defended very well.. tough result really.
Big thanks to Molly Crehan and Cara Moriarty from the u15s who helped us out tonight and both played really well.

A reminder that the carpark to the right as you enter is privately owned by LAG and is only open from 6pm in the evening for Leixlip United. We have received complaints that people are trying to park there prior to 6pm. Can members please park in the main carpark if you have training or matches before 6pm.

Our deepest sympathies to the Lennon family

We were very sad to hear the news of the passing of Eilee...

Leixlip United is delighted to welcome Derek Byrne on boa...

Win tickets to the Ultimate Irish Playlist over on our Fa...

We have 3 pairs of tickets to this event in The Helix in ...

Have you seen our billboard??

We're delighted to see the Cadbury's billboards up around...

A reminder that the carpark to the right as you enter is ...