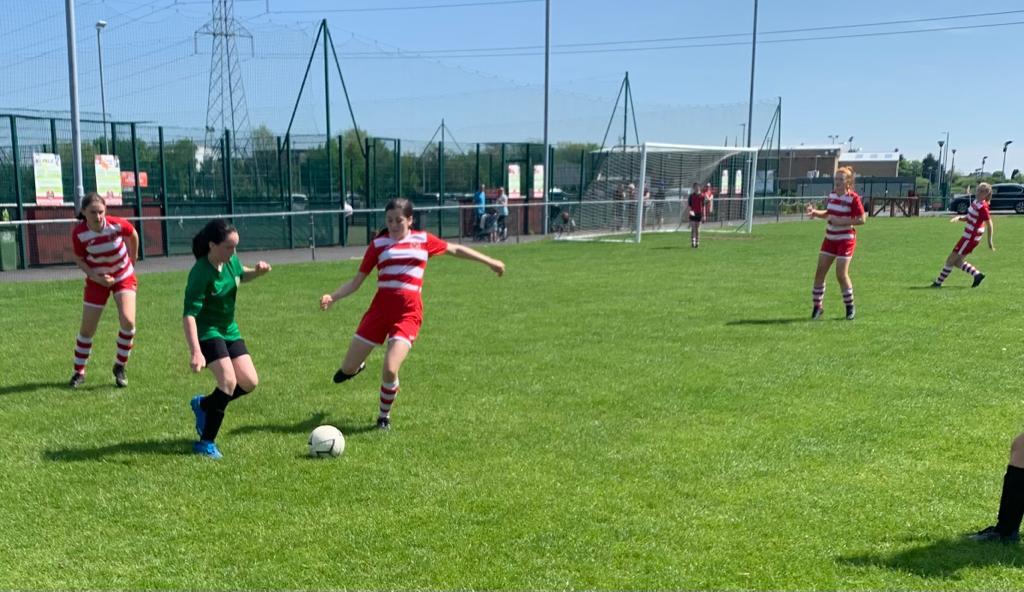 (Photo featured above shows our U14s Isabelle Mularkey on the ball with Ríona Kelly, Lauren Doyle and Molly Crehan in the background)

Mini Leagues
Our annual Mini Leagues are taking place over the June Bank Holiday weekend. Younger children can take part in our Academy Cup (free of charge) and older children can register for our main Mini Leagues competition (€10 per child).  Children do not need to be members of Leixlip United to take part - everyone is welcome.

This year promises to be even bigger and better than ever and places are booking up fast so register today on https://www.leixlipunited.com/products

We would love more volunteers to come on board so if you would like to help out in any way (team managers, referees, stewards, card-collectors etc ) please contact Robbie at robert15carton@gmail.com 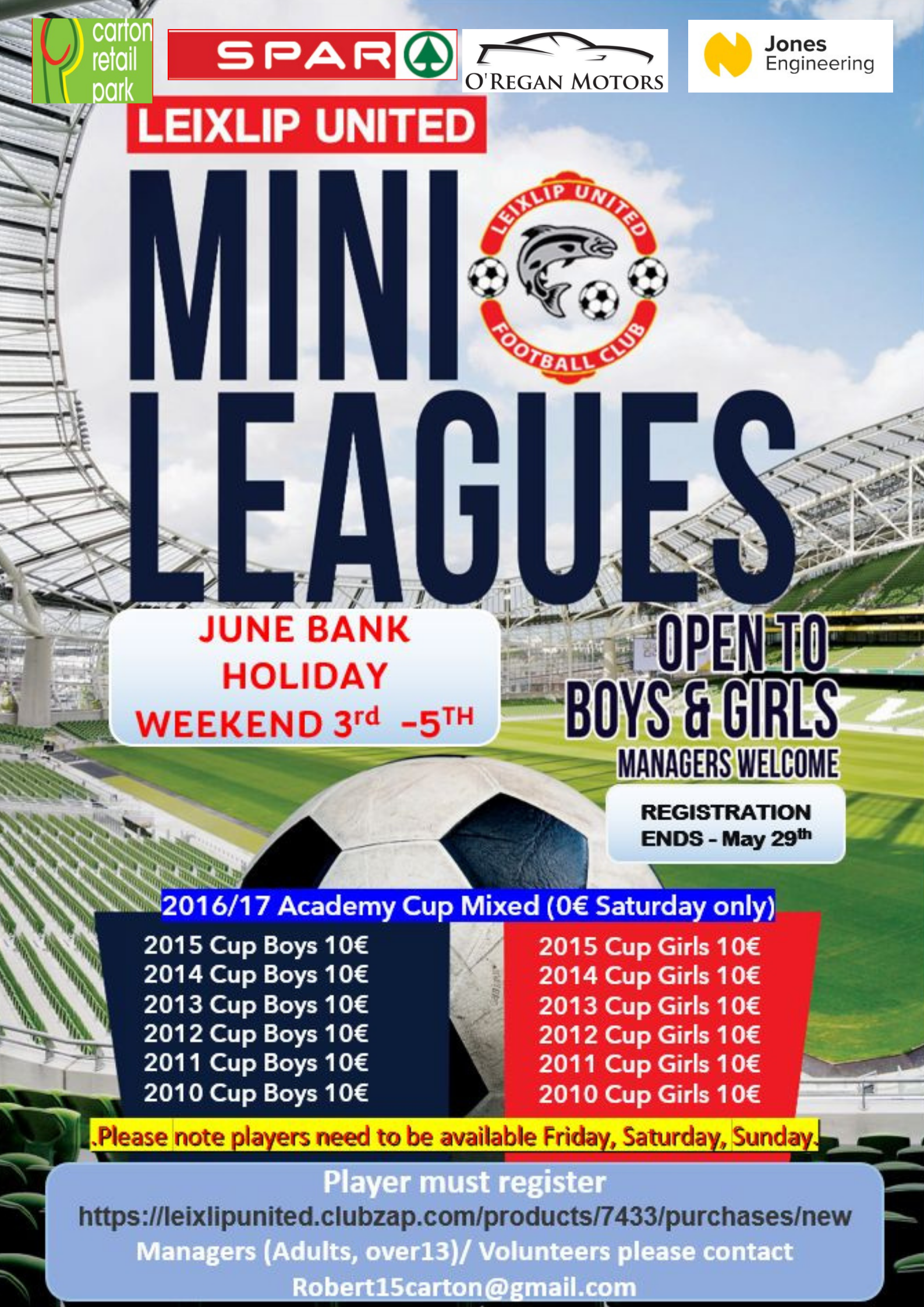 Both camps can be booked on the following link https://bookings.summersoccerschools.ie/s/camp-list

U14-6 Raheny 0-2 Leixlip utd
A hard fought but deserved victory. It should have been more comfortable but we didn't take our chances. We took a first half lead via a Sean Duffin effort, but we did not add to it until the last 5 minutes when Noah Dagg latched onto a loose ball and fired home to secure the 3 points.

16 prem St Kevin’s 1-2 Leixlip
Two second half goals from Rocco and a rebound from Andrew put us two up. A late Kevin’s goal couldn’t change the result. Very proud of boys ahead of cup final next Sunday

16 Premier Cup Semi final Leixlip 2-1 Cherry Orchard (aet)
It was some game last Friday up in the club and with 4 missing we knew it would be a battle. We started ok as both teams created chances. We lost a goal when the ball over top wasn’t defended and their centre forward poked it home.  We were much stronger in the second half with the equaliser coming after great work from Kane and Callum rose highest to header home. We created better chances but game ends and after nearly all extra time had been played a header from Albert fell into Ake’s path to prod home on the whistle.
Delighted for boys to have a final . Much appreciated the great support.

U12C Belvedere1-4leixlipUnited
Finally got to play our final league game 6 weeks after the last game.  2  early goals from James McGee and Rian Fahey put us in control for much of the half. Ran Fahey had a couple of goals ruled out for offside that were debatable to say the least.  Against the run of play Belvedere got one back. Pretty much straight from tip off James McGee picked up the ball on half way line and dribbled through their whole defence and rounded the keeper to make it 3-1 at half time.  The 2nd half was more of the same and their keeper kept the score respectable until Rian Fahey finally got the goal - his second late in the game.  Good finish to the season

LSL U20 league cup semi final result: St pats 2-1 Leixlip Utd
Started poorly, gave away a goal after 4 mins, then we had a player sent off after 35, we were excellent with the 10 men , just couldn’t get an equaliser, hit the bar, cleared off line, their keeper making massive saves. Just not our night.

Under 18 girls premier
Leixlip 5 Lucan United 0
Finally the win we have been threatening for a couple of months. We actually started very slow in this one and it was a scrappy close first half. Once we found our feet we started to knock the ball around and we created a huge amount of chances and thankfully took a few of them. A big thank you to 4 of the under 16 team that played with us tonight they made a massive difference and were all excellent on the night, Katie  Isobel, Jae and Saoirse. Our goals were scored by Jae Howard, Katie Allen, Olivia Grange and 2 for Sophie Kehir.

U18 Cup semi:
Portmarnock 1 v 5 Leixlip.
The lads earned a well deserved win today to set up a final at the AUL complex next Friday. In the final we will play Ballymun to whom we were runners up in the League. We thoroughly deserved the victory and went 1 up 15 mins before HT with an outstanding long range strike from James Seery. Portmarnock equalised against the run of play 10 mins into the second half, and while they got on top for about 10 mins they could not capitalise. We weathered the storm and Sean Slatterry restored the lead and Luke Gorman added a 3rd before both Sean and Luke netted to give us a 5-1 victory. Delighted for the lads, most of whom have been at the club since they were 6 or 7 and now they get to play their last schoolboy match in a cup final.

U11 Sun B Leixlip Utd 3 - Stella Maris 0
Very solid performance from the lads and great to get a clean sheet as it's something we're not very accustomed to.
Conor Tighe & Senan McAuley got the goals in the first half with Adam Rafferty adding the 3rd midway through the second half.

U16 girls Malahide 2 Leixlip 1 (Photo Attached)
Incredibly unlucky from the girls today. We went 2 0 down early, the first goal was given despite not seeming to cross the line. Jae Howard pulled one back and it was one way traffic from there. We missed chance after chance in the second half including a few that looked easier to score. Had several chances in the last 10 minutes, but it wasn't our day. 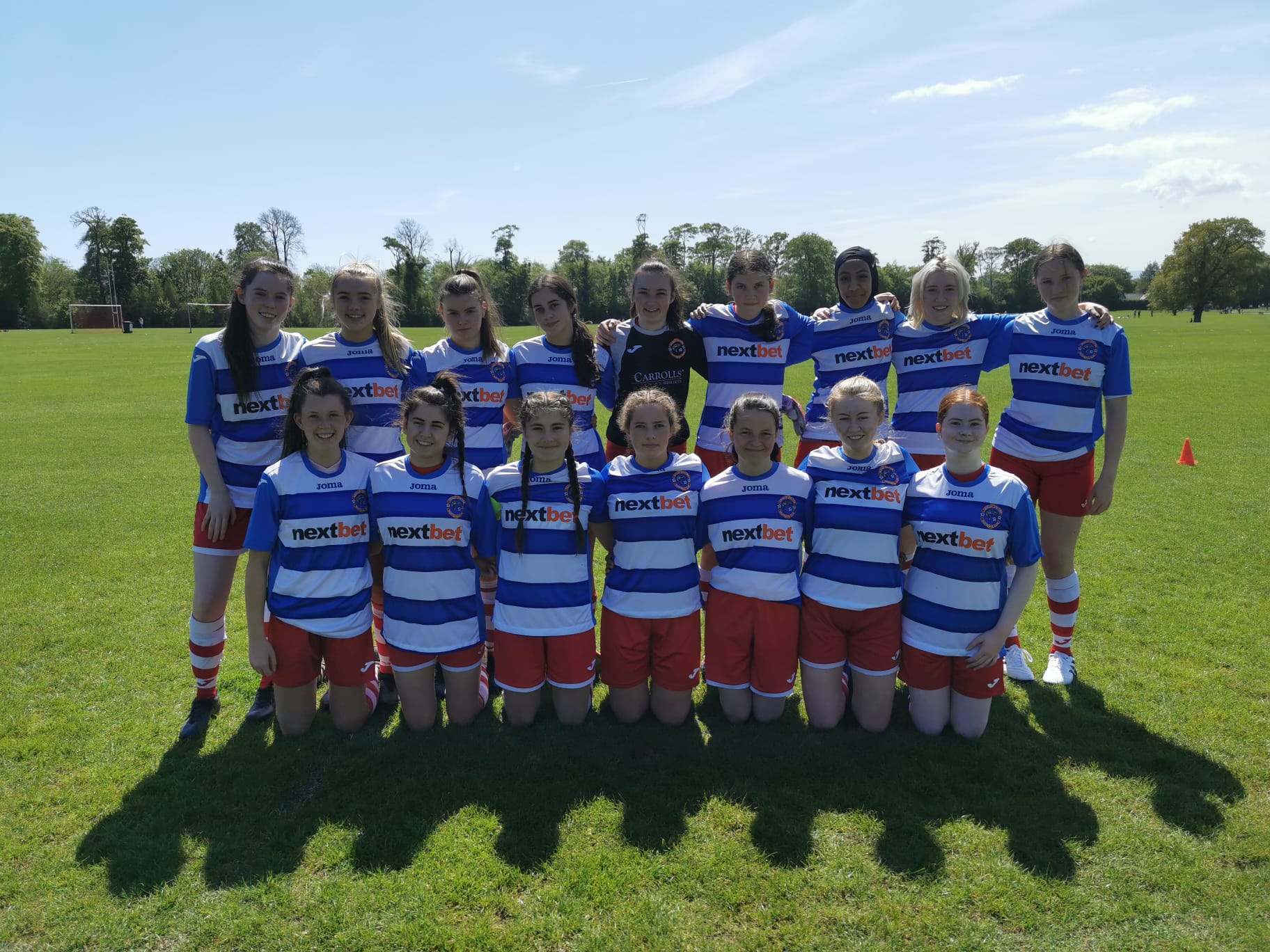 Under 18 girls premier
Cabinteely 4 Leixlip 4
Another crazy game for our girls today, missing a few players it was always going to be tough. We trailed 1 nil at half time against the wind so thought we were in good shape but then conceded some bad goals and missed some chances, ended up going 4 1 down with about 10 mins left. The girls kept battling and we scored late goals through a great free kick from Ella Malone, a penalty from Nicole Mc Dermott and two great goals from Sophie Callaghan

U14b MGL: Leixlip 2 : Greystones 1
We started brighter but soon conceded an OG when a cruel deflection put the ball past our keeper. Quite soon after Riona Kelly slotted home from a Grace Kelly corner - an almost carbon copy of their goal from our last match. Not a training ground move but will be now.
Just before the break Cara Moriarty won possession high up the pitch and chipped their keeper for what turned out to be the winner.
We had the best of the chances in the second half but had to defend a few scrambles too. Keeper Evie McNaughton diving for one memorable stop.(Photo featured above shows Isabelle Mularkey on the ball with Ríona Kelly, Lauren Doyle and Molly Crehan in the background)

Well we can safely say that football is alive and well in...

Hi All, we're looking for volunteers to help us clean up ...

A great weekend for the club with the 16s winning the Cup...

We were very sorry to hear the sad news that Brendan Lawl...

We'd like to give notice that the Leixlip United AGM will...

Shout out to Glen Easton Spar for sponsoring our Mini Lea...

Every year Bernard Kealy from Glen Easton Spar steps up a...